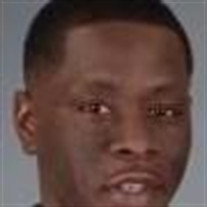 Adrian Elbert Dolford, 31, widely known as “Woo” was a vibrant, full of life, young man who was always the “Life of the party”. Despite recent events that took him away from so many prematurely, his loving heart left a beacon of light for all that knew him well. Adrian was a no non-sense fellow, who was genuine, loyal, honest and always stayed true to his beliefs. Adrian had a soul of beauty and a smile that one could never forget. With a laugh so infectious and personality so addictive, he was well known and loved by many. He was also well respected; Adrian has truly left his mark on so many people in such a short time. Adrian was born November 4, 1989 in Florence, South Carolina. He attended school in Lamar, South Carolina. Adrian earned a living in the Dolford family Concrete business, where he became employed at an early age. Adrian is survived by; his beautiful Fiancé’ Britney Dudley; he was the proud father of their handsome son Dallas S. Dolford; their family was also made complete by two beautiful jewels Mariah and Morgan Bonaparte; his Mother, Addie D. Samuel; his Father, Elbert Washington; His maternalGrandmother Javer Dolford; his siblings, Latray Dolford (Alvani), Elbert Graham and Kimberly Graham; six nieces and three nephews; several aunts and uncles; tons of very close cousins and friends; best friends Calvin Brown, Jerel McCall, Raheem Fortune, Jaquan Goodson and Darrel Dudley. He was preceded in death by his maternal Grandfather, Monroe Dolford, older brother Sammie Lee Samuel, paternal Grandfather William Rufus Gilliard and paternal Grandmother Lula Bell Washington. Adrian’s purpose was fulfilled as he gained his wings on February 20, 2021. Though unexpected, rest assured that you have gained a guardian angel, as we all know that he was very protective of the ones he loved.

Adrian Elbert Dolford, 31, widely known as &#8220;Woo&#8221; was a vibrant, full of life, young man who was always the &#8220;Life of the party&#8221;. Despite recent events that took him away from so many prematurely, his loving heart left... View Obituary & Service Information

The family of Adrian Elbert Dolford created this Life Tributes page to make it easy to share your memories.

Send flowers to the Dolford family.