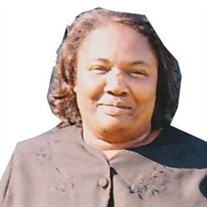 Prophetess Alvida Dickson Bines began life's journey on January 1, 1950 in Olanta, South Carolina. She was the daughter of the late Mr. Than and Mrs. Alma Dickson. She departed this earthly life and entered into eternal rest on Thursday, September 24, 2020. Alvida attended Florence County Public Schools. She later attended Chris Logan cosmetology school, graduating with honors. She worked in various salons before establishing her own, "Remember Me". Alvida had a passion for the care of children which led to the start of her own home daycare center, which she also named, "Remember Me". Her love and concern for the safety and well-being of children prompted her to begin fostering. Early in life, Alvida attended Antioch Baptist Church, Timmonsville, South Carolina and later became a member of End Time Apostolic Church, Florence, South Carolina under the leadership of Apostle Lucius Dubose. She was baptized in the name of Jesus Christ and received the gift of the Holy Ghost. While there, she served faithfully as usher president, choir member, Pastor Aid, and Sunday school teacher. She also accepted her call into the ministry as a prophetess. She later joined the Mount Calvary Apostolic Church, Timmonsville, South Carolina where she continued to serve in this ministry preaching and teaching the word of God. Prophetess Bines also serve as a Sunday school teacher, choir member, president of the women's auxiliary and chaplain of the board of directors. Prophetess Bines was a dedicated servant of God who would not let her physical condition prevent the work that God had assigned for her to do. For the many years prophetess Bines attended New Generations Adult Day Care Center, she continued to labor diligently for the Lord, witnessing and leading devotion. Prophetess Bines was a loving mother not only to her own children but many others that knew her. She loved to cook and became well known for her barbecue. She was also a skillful seamstress. Prophetess Bines was preceded in death by a daughter, Shaunda Evette Bines; her mother and father; one brother, L. J. Dickson and one sister Jennie Lou Dickson. Left to cherish her precious memories are: two daughters Jacquelyn (Gary) Ingram of Florence, South Carolina and Amy (Edward) Thomas of Lawrenceville Georgia; seven siblings, Leroy Dickson, Lou Esther McFadden, Ed Lee (Laura) Dickson, Willie Joe Dickson, Leona Dickson, Al Dickson, and Betty Lue Carter; three grandchildren, Tamara D. Thomas, Edward Deon Thomas, Jr. and Michael DaShaun Dewey; one goddaughter Mya Latrice Dubose; one special spiritual sister, Minister Cheryl Ellerbe; aunts, uncles, nieces, nephews, other relatives and friends.

Prophetess Alvida Dickson Bines began life's journey on January 1, 1950 in Olanta, South Carolina. She was the daughter of the late Mr. Than and Mrs. Alma Dickson. She departed this earthly life and entered into eternal rest on Thursday, September... View Obituary & Service Information

The family of Prophetess Alvida Dickson Bines created this Life Tributes page to make it easy to share your memories.

Send flowers to the Bines family.