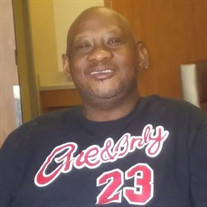 The youngest of ten children, Mr. Andrew Timothy Samuel was born on December 8, 1965 to the late Feola J. and Wilbert McDonald Samuel. He departed this earthly life on Friday December 24, 2021 at Parkland Hospital in Dallas, Texas at 5pm in the evening. Andrew as he was affectionately called was educated in the public schools of Florence County. He graduated from Timmonsville High School in 1984. Upon graduating he spent many years serving the community by volunteering as a youth football coach. Andrew, as a member of Living Word Tabernacle, was baptized in the name of Jesus where he served faithfully on the Deacon Board. He later was called to the Ministry and was ordained under the leadership of Elder Lawrence McElveen. A few years later Andrew was then called to start his own ministry “Healing Hands Outreach Ministry of Grace”, where he served as head pastor for many years and until relocating to Texas. Andrew worked in the healthcare field for many years. He worked for “Pee Dee Mental Health Center” for several years and also as a private caregiver. His passion for helping others and serving the community motivated him to start his very own healthcare agency called “New Life Healthcare.” He served and employed people from all over SC,NC and GA for many years until relocating to Texas. In addition to his parents Andrew was preceded in death by one sister Rodella Samuel Pigett , three brothers Perry Samuel, Lucious Samuel Jr. and one brother who died at birth. His paternal grandparents, Mary J. and Rev. Lucious Samuel Sr, his maternal grandparents Malissa B. and Roland James. those left to cherish his memories are: three daughters, Brittany Samuel and Charity Samuel of Timmonsville, SC and Andrea Samuel of Rochester ,NY; two sons, Timothy Samuel and Ezekiel Samuel both of New York; three sisters, Lissie Samuel of Brooklyn, NY, Lillie(Clarence) Joe of Timmonsville, SC and Mary McElveen of Florence, SC; two brothers, Johnnie (Freddie) Samuel of Effingham, SC and Leo (Kelly) Samuel of Boise, Idaho; his fiancé Tanya Nelson of Dallas, Texas; eight grandchildren Harmony Samuel, Deonta Samuel, Julia Samuel, Karrington Graham, Mason Fleming, Akeem Miles, Denver Lacy and Gracen Samuel; three sisters -in-law; one brother-in-law; two uncles; two aunts; nieces; nephews and a host of other relatives and friends.

The youngest of ten children, Mr. Andrew Timothy Samuel was born on December 8, 1965 to the late Feola J. and Wilbert McDonald Samuel. He departed this earthly life on Friday December 24, 2021 at Parkland Hospital in Dallas, Texas at 5pm in... View Obituary & Service Information

The family of Andrew Samuel created this Life Tributes page to make it easy to share your memories.

Send flowers to the Samuel family.