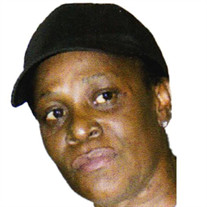 Ms. Annette “New York” Davis was born in Lamar, South Carolina on August 13, 1964 a daughter of Ms. Elouise Cleveland and the late James Jake Davis. She became a mother to Jessie Allen Davis and a grandmother Karson Jade Davis. She entered into eternal rest on Tuesday, April 13, 2021 in Rochester, New York. Annette received her formal education in New York graduating from George Wingate High School with the class of 1982. Annette was a natural comedian, with just a look she could make you smile. She loved music and had a two step that matched any song she played. Her other loves were dancing, roller skating, and spending time with her family and friends. “New York” as she was affectionately called by her family and friends was a bright and loving daughter, mother, grandmother, sister, aunt, niece and cousin. She really knew how to light up a room and she will truly be missed by all. She was preceded in death by her father James Davis; and two brothers, Jessie Allen Davis and Donnie Mitchell Davis Those who shared the joys of life with her and survive to cherish her memory are: her loving mother Elouise Cleveland; one son Jessie Davis; one granddaughter, Karson Davis; four sisters, Angela Davis, Lela Davis, Tracy Smith, and Veronica Smith; a host of aunts, uncles, nieces, nephews, cousins, other relatives and friends

The family of Annette Davis created this Life Tributes page to make it easy to share your memories.