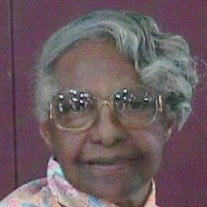 Ardria White McElveen was born on March 2, 1923 in Lynchburg, SC to the late Clash Harold White and Minnie Barnes White. Under their Godly leadership, Ardria became a Christian at an early age. She served at St. John United Methodist Church for many years. She could be found singing in the adult choir and the gospel choir. Ardria loved children and would often give out candy to the best-behaved after church. Ardria attended Sumpter County schools and graduated from St. John High School and later was united in Holy matrimony to the late Charlie McElveen and to this union three children were born; Charles, Philipia, and Maurice. Ardria was very gifted and was employed as a seamstress for many years. Some of her accomplishments were as follows: She often made her own originally designed clothing from patterns that she created herself. She and her daughter would often dress alike in those creations. She also made drapes for her entire home; and in her retirement she made quilts, and other crafts that included crocheting, and knitting hats, scarves, and blankets for her friends and family. She was lover of food and held the position of a cook. She was an amazing hostess. You could not visit her home without leaving stuffed from all the goodies that were offered or even prepared right on the spot if requested. She had a way of making everyone that she met feel special. Although Ardria had many hobbies, fishing was one of her favorite things to do. She loved fishing in the local ponds, however, she had a pond build on her own property to make it more convenient. Ardria departed this life on Sept 7, 2020 at Lake City Community Hospital. She was preceded in death by her sons Charles (Harold), and Maurice Mc Elveen. She was also preceded in death by her siblings, Lee, Earl, Ether, Lou Bertha, George, and Wesley. She leaves to cherish her memories her daughter Philipia Cherry of Lynchburg, SC., her two sister in laws Shirley McElveen of Florence, SC and Louise White of Palmetto, GA. She will also be lovingly remembered by her five grandchildren: Alphonso Cherry of Lynchburg, SC, Lovetta Ervin (Robert) of Lynchburg, SC, Detrick Cherry of Atlanta, GA, Makeba Dixon (The late Deacon Pearlie Dixon) of Timmonsville, SC, Tamara McElveen of Columbia, SC; 11 great grandchildren, and 5 great- great grandchildren along with a host of nephews, nieces, cousins, and friends.

The family of Ardria McElveen created this Life Tributes page to make it easy to share your memories.

Send flowers to the McElveen family.