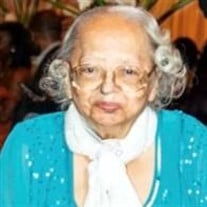 Barbara Ernestine Outler, age 84, of Effingham, SC is now at rest. Barbara was born March 21, 1937 in Timmonsville, SC and passed away Saturday, October 9, 2021. She was a proud honors graduate of the private African-American boarding school... View Obituary & Service Information

The family of Barbara Outler created this Life Tributes page to make it easy to share your memories.

Barbara Ernestine Outler, age 84, of Effingham, SC is now at...

Send flowers to the Outler family.