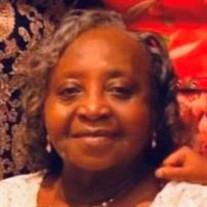 Some people only walk this earth for a short time and some stay for a while. Their departure reminds us that angels are watching over us. Tuesday March 30, 2021, Bertha Mae Peterson Durant rejoined her heavenly family and gained her wings. Bertha Mae, also known as “Bert” was born February 24, 1944 in Lee County to the Late mother Flossie P. Allen and Father Mack Harry. She attended the Lee County Public School System. Bert was joined in holy matrimony to the late Plummer “June” Durant.”Bert” dedicated her life to Christ at an early age.She was a faithful member of Macedonia Holiness Church, where she held the position as the church secretary and a member of the usher board for over 50 years. She also President of the Junior Willing Workers Children’s Choir for over 10 years,she would load the entire choir in her big blue car to the afternoon services. She was a member of the Gospel Choir over 30 years and also a member of the Thompson Mass Choir for 29 years. While she was dedicated to her church obligations. Bert was a talented seamstress in her community. Her talents WERE used in to the local schools, city league sports, wedding parties, sororities and youth apparel. Along with being self-made, she was a 30 year Avon Sales representative. She was also employed with Marlowe’s Manufacturing which changed to Klear Knit. She then transitioned to Oxford where she retired. While she remained a woman on the move, she managed Durant Southern Style BBQ. Her love for children led her into the final career as a child care provider. Bert was preceded in death by her parents Flossie P Allen and Mack Harry, sisters Thomasena and Deloris Allen, brothers, James and David Allen . She leaves to cherish precious memories: one Son, Plummer Rickey (Cleo) Durant of Lamar SC; four daughters, Yvonne (Walter)) Wingate of Timmonsville SC, Julie (Ronnie) McAllister of Evergreen SC, Sherry (Timothy) McFadden of Timmonsville SC and Joyce Young of Timmonsville SC; one special grandson that she raised as her own, Omar(Tonya) Williams; sisters, Diane (Calvin) Smith of Timmonsville SC and Shirley Allen of Timmonsville SC, Phylisha (Frankie) Green of Lynchburg SC, Loretta Harry of Lynchburg; Mary Etta Harry of Lynchburg, Marian Harry Hickson of Lynchburg and Hilda Harry of Lynchburg;brothers, Thomas(Penny) Allen of Charleston SC, Ray Harry Lynchburg, Joe Harry of Baltimore MD, Bobby (Cynthia) Harry of Batore MD and Pomanda (Mona) Harry of Charlotte NC; four sisters in-law, Lela (Robert) Windham, Ida (Alphonso) Tobler, Evelyn Robinson and Patrina Murray; thirteen grandchildren and twenty great- grandchildren, whom she befriended, loved and enjoyed playing games, watching sports and giving wise counsel; a host of nieces, nephews, other relatives, friends and adopted grandchildren she loved and cared for dearly. God promised 3 scores and 10. “Bert” was blessed with 3 scores and 10 plus 7. A legacy of 77 years.

Some people only walk this earth for a short time and some stay for a while. Their departure reminds us that angels are watching over us. Tuesday March 30, 2021, Bertha Mae Peterson Durant rejoined her heavenly family and gained her wings. Bertha... View Obituary & Service Information

The family of Bertha Peterson Durant created this Life Tributes page to make it easy to share your memories.

Some people only walk this earth for a short time and some stay...

Send flowers to the Durant family.