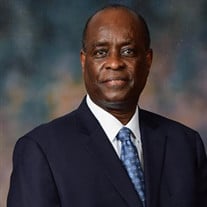 "Be strong and courageous. Do not be terrified because of them, for the Lord your God goes with you, he will never leave nor forsake you". Deuteronomy 31: 6 On May 25, 2021, the world lost a man who dedicated his life to the betterment of others. Clarence Columbus Mansell, Jr., was born on September 25, 1953 in Sumter County, South Carolina to parents of Harnethia Neomia Johnson and Clarence Columbus Mansell, Sr. Clarence Jr. accepted Jesus Christ as his savior at a very young age, and was proud to let others know that his light only shined so bright because of his love for the Lord. Clarence Jr. was the first-born son of what became a family of seven boys. His father Clarence Sr. was a career service man in the United States Air Force, therefore Clarence Jr. lived in a military family from birth to adulthood. His love for Veterans continued in his work to support Military Veterans and their families. He also followed in his father’s career path into wastewater treatment. Anyone who came into contact with him knew of his love and dedication to his industry and extraordinary knowledge in the field. He would often share the facts and trivia of his field to those he met whether you were interested or not as we have fond memories of. Clarence Jr. continued throughout his career to inspire others to get into the water business and helping those already employed to promote with his mentorship. Clarence Jr. was also Founder and Senior Consultant to Clarence C. Mansell Jr. and Associates, a Consulting Firm dedicated to provide for the finance, design, construction, operations, and management of water and wastewater systems including the protection and management of environmental resources. Clarence, Jr. loved his two children, Harnethia Mansell and David Mansell, and did everything in his power to provide for them. He a proud father. In addition to his father, Clarence, Jr. was preceded in death by his brother, La’mond and his beloved daughter Harnethia, lovingly known as “Nia”. Clarence Jr. is survived by: his wife Deborah; his mother Harnethia; his son David; daughter-in-law Mary; three grandchildren, Landen, Calvin and Ava; five brothers Selwyn (Mona), James (Ann),Patrice, Pascal (Rhoda) and Bruce (Elena); sister-in-law, Julanda “Julie”; his cherished aunt Hallie “Q" ; his former spouse Margaret; numerous nieces, nephews and cousins.

"Be strong and courageous. Do not be terrified because of them, for the Lord your God goes with you, he will never leave nor forsake you". Deuteronomy 31: 6 On May 25, 2021, the world lost a man who dedicated his life to the betterment of others.... View Obituary & Service Information

The family of Clarence Mansell Jr. created this Life Tributes page to make it easy to share your memories.

&quot;Be strong and courageous. Do not be terrified because of them,...

Send flowers to the Mansell family.