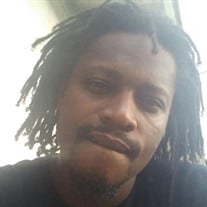 Mr. Detrick S. "Dolford " Gibbons was born in Florence on August 26, 1984 a son of Willie Gene Dolford and Shirley Gibbons. He entered into his final resting place on Friday, September 11, 2020. Dolford received his formal education in the... View Obituary & Service Information

The family of Detrick Dolford Gibbons created this Life Tributes page to make it easy to share your memories.

Send flowers to the Gibbons family.