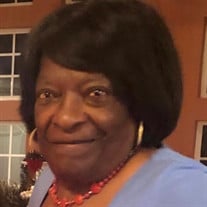 Earline Delores Johnson Perkins was born to David Johnson Sr. and Pauline Butler Johnson on June 18, 1939, in Timmonsville South Carolina. She was the seventh child of nine. Earline was quietly called home on Friday October 9, 2020 while at the McLeod Hospital in Florence SC. Earline, affectionately known as “Bobbi” to her family and friends was educated in the Public Schools of Florence County South Carolina. She graduated from Johnson High School, in Timmonsville, SC, class of 1957. She accepted Christ at an early age, and attended New Zion Baptist Church, in Sardis SC. Immediately after High School she married her High School sweet heart, William “Boy” Perkins Jr. They lived most of their adult lives in Washington DC and Maryland. Her home was always open to her family and friends. Many of her nieces and nephews, spent time visiting her when school was out for the summer. She spent most her time as a house wife, but also work as a sales clerk in a department store for many years. After living many years in Washington DC and Maryland Bobbi and her husband William (Boy) Perkins moved back to Timmonsville SC. Within this time, she dedicated her life to Jehovah and became a preacher of the pool good news, of God’s kingdom! One of her greatest joys was the day she was baptized. She loved field work and the fellowship with her brothers and sisters of the congregation. After her beloved husband (William) transitioned in 2017. Earline faced declining health issues, which led to her moving in with her brother, Herbert and his wife Ralphine Johnson. They provided her with love, care and support until her last days. In addition to her parents, Bobbi was proceeded in death by her Husband William “Boy” Perkins Jr,, sisters, Mary Lou Chatman and Virtel Johnson, brothers ,William Johnson and Charles Johnson. Mrs. Earline “Bobbi” Perkins precious memories will be cherished by: her step daughters, Anita Keels, Timmonsville SC and Veronica McDowell, Washington DC; a special granddaughter, she raised as a daughter, Twarnisha Stokes, Upper Marlboro, MD and Cynthia Bruce Marlboro, MD; five granddaughters; five grandsons, seven great -grandchildren; brothers, David Johnson (wife Clara Mae – deceased) and Herbert Lee (Ralphine) Johnson; sisters, Dorothy White and Caroline Franklin; sister-in-law, Thelma Brown Perkins;, special family friend Naomi Jackson; a host a nieces, nephews, cousins and other family members.

Earline Delores Johnson Perkins was born to David Johnson Sr. and Pauline Butler Johnson on June 18, 1939, in Timmonsville South Carolina. She was the seventh child of nine. Earline was quietly called home on Friday October 9, 2020 while at... View Obituary & Service Information

The family of Earline Delores Perkins created this Life Tributes page to make it easy to share your memories.

Send flowers to the Perkins family.