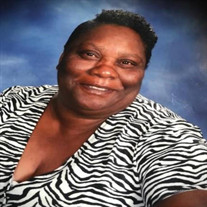 Glenda Gail Cooper-Jackson was born April 13, 1960, in Darlington County, the daughter of the late Rosa (Junius) Cooper and Mr. Charles McCray. She was called home to be with the Lord on Friday, October 22, 2021. Glenda received her formal... View Obituary & Service Information

The family of Glenda Jackson created this Life Tributes page to make it easy to share your memories.