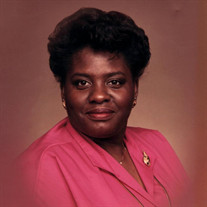 Mrs. Helen Boston Spann, 71, of Lamar, SC, entered eternal rest on Wednesday, January 26, 2022. She was born Friday, February 10, 1950, in Lamar, SC, to the late Mr. James Boston, Jr. and Mrs. Lettie Bess Boston. Her home birth was a difficult one, being born premature & breached, that not even the doctor thought she would survive, but God had a plan. In the late 1950’s, Helen and her family relocated to Harlem, NY, having resided with a good Samaritan on St. Nicholas Ave. In the early 1960’s they moved into an apartment above the Lennox Avenue Church of God at 227 Lennox Avenue, New York City (Harlem), NY, and attended the Hans Christian Anderson Public School 144 there. Through the many hard knocks her family experienced during this time, they prevailed, because God had a plan. In the mid-late 1960’s, Helen and her family returned to Lamar, SC, to assist the ailing family Patriarch with the Boston Family Farm. Upon returning, Helen attended Spaulding High School, where she blossomed with each year. In her Senior year, Helen was quite active, participating in the school choir, Future Homemakers of America, and as a member of the Commerce Club. In her Home Economics class, she was named Top Seamstress, a title well-deserved and long-lived. Helen was an attendant to Ms. Senior as one of the runner’s up. She was also voted by her class as “Most Dependable,” a trait that followed her throughout her life. However, her pride and joy was being a Spaulding High School Cheerleader, where she cheered the Tigers on with all her heart. Helen graduated from the all-black Spaulding High School in 1969 and was a faithful member of the class until her passing. Upon High School graduation, she was married her high school sweetheart, the late Mr. Calvin Spann, on July 11, 1970, and to this union 4 children were born. Helen became an Independent Seamstress, Tailor, and Designer. She was known in Lamar and throughout neighboring cities and counties as a master seamstress. At times she was expected to perform miracles, and she never disappointment. Every gown her daughter wore, she made, even when others thought it was worth “a fortune”. She also made many of her own dresses. There were times when customers came with a picture and a dream and Helen would take their pictures, drawings, and dreams and bring them to life. On one such occasion, she made an entire wedding dress overnight after the bride was less than satisfied with another designer’s work. Though she worked different manufacturing jobs throughout life, Helen always remained faithful to her independent craft of sewing as her personal business. Helen was a faithful and supportive wife, mother, and friend, supporting her then husband with entrepreneurial ventures, being present at most every sporting event and cheering her children and others on from the sidelines. Helen was a faithful servant of God and the community. She volunteered at her children’s Head Start program and was awarded the Parent of the Year for DCCAA Head Start in 1977 and in years to follow. Helen was intentional, loving, and caring when it came to parenting her children and others. Hers was the house to be because of the love, discipline, and good food she would prepare to eat. Because of her commitment to raising her children, Helen turned down higher paying jobs to be present for her children at night and on weekends, which has instilled in them the importance of family. Her commitment to community was reflected in her dedication to her civic, social, and communal organizations. Helen joined the Order of the Eastern Stars, Faithful Workers Chapter #229 in May 1978, committing 44 years of her life to this sisterhood. Over the years, she served in many positions, including chapter treasurer, and as most of the points. She is the immediate past Worthy Matron of the Chapter. Helen was also a Charter Member of the Lamar African Violent Flower Club, whose purpose and mission was to beautify their surroundings. They kept a beautiful flower garden in the center of town and held a yearly Black History program that featured speaker, plays, singers and other performers. Her contribution won’t be soon forgotten. Helen’s life will forever be cherished in the lives of those she loved: Daughter, Amy Michelle Spann Ciceron (Jean-Franck) of Jacksonville, NC; Sons: Clayton Lamart Spann (Wygelia) of Atlanta, GA, John Edward Spann (Tammy) of Murphy, Texas, and Jerette Ellis Spann (Kanika) of Upper Marlboro, MD; one sister: Delphine Simon of Hartsville, SC; two brother, Moses Shaw of Lamar and Bernard Simon of Richmond, VA.; three sisters-in-law; Sharon Boston, Darlington, SC, Dora Spann, Bronx, NY, and Hester McKay, Lamar, SC; two brothers-in-law; Robert Spann, E. Stroudsburg, PA, and John Spann (Virginia), Hartsville, SC; five grandchildren: Gabrielle Marie Ciceron, Morgan Nichole Spann, Nicholas Antoine Ciceron, Jerette Peyton Spann and Shawn James Spann; Special God-daughters, Cynthia McAllister and Brittany Addison; Special Friend: Madgeline McCullough; Dedicated Caregivers and a host of nieces, nephews, relatives and friends. In addition to her parents, she was preceded in death by her brothers Bennie Boston and James Boston, III.

The family of Helen Boston Spann created this Life Tributes page to make it easy to share your memories.

Send flowers to the Spann family.