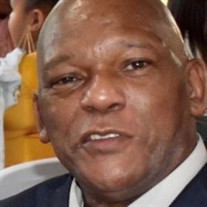 Deacon Henry Allen Davis Jr., also known as “Jimmy”, 63, was born in Lee County, SC, on December 1, 1958. He was the eldest of eleven children born to the late Deacon Henry Allen Davis Sr and Edell Windham Davis. Jimmy transitioned into eternal rest on January 30, 2022. Jimmy graduated from Timmonsville High School in 1978. He obtained his certification in brick masonry from Timmonsville Vocational Training Center. He later attended Florence Darlington Technical College to learn the trade of welding. Jimmy’s craft was in his hands. He could do most anything. He was a diligent worker in various jobs. Jimmy was an employee of the Railroad Industry, Tyler Plywood Company, Santee Print Works, and International Knife and Saw. His last place of employment was with Coca-Cola Consolidated. He continued with his career until his health declined. Jimmy was a faithful lifelong member of Church of God by Faith, Lynchburg, SC. He pursued his calling to serve God in many capacities with humility and great faith. Jimmy was appointed as a deacon in the early 1980’s. He also served as a member of the inspiration choir, usher board, and as a church handyman. Deacon Jimmy spearheaded and assisted with the initial building of the Church of God by Faith, Lynchburg, SC. He also assisted with the construction of the existing church. Deacon Jimmy was a man who lived his Christian faith in many ways. He lived a life of lending a helping hand wherever needed with a smile on his face. He cared for the sick and elderly by being a caregiver to the very end. It was evident in every interaction with him that he loved and trusted the Lord with all his heart. His gentle spirit had an everlasting impact on everyone he encountered. If a man’s worth is measured by the legacy he leaves, then Deacon Jimmy is pure gold. In addition to his parents, he was preceded in death by one sister, Sharon Davis Quick; maternal grandparents, Lucious and Lucy (Shuler) Windham; paternal grandparents, Robert and Emma (Amos) Davis. He leaves to cherish his precious memories: siblings, Betty (Johnny) McDowell, Allen (Yvonne) Davis of Timmonsville, SC, Carolyn (Russell) Nance, Michael (Aretha) Davis, James (Yolanda) Windham, Russell (Diane) Davis of Florence, SC, Frankie Davis of Columbia, SC, Princess (Arthur) Benjamin, Clarence (Felicia) of Florence, SC, Tyrone (Doris) Davis of Timmonsville, SC; aunts and uncles, Robert (Lela) Windham of Timmonsville, SC, Clarence (Rose) Windham of Baltimore, Md, James Taylor of Sumter, SC, Velray Davis of Winnsboro, SC; god children, Savannah McDowell and Remar Davis. He is further survived by a host of nieces, nephews, cousins, and dear friends.

The family of Deacon Henry Davis created this Life Tributes page to make it easy to share your memories.