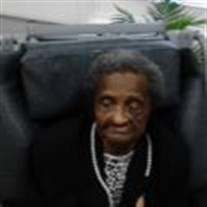 MRS. ISADORA (“DORA”) PERKINS BYRD peacefully entered eternal rest on Friday, January 24, 2020 at McLeod Hospice House in Florence, South Carolina. She was considered an American Super-Centenarian, being blessed with One Hundred and Eleven years of life. DORA was the oldest of five children, born on August 22, 1908, in Timmonsville, South Carolina to the late Simon Perkins and Lanie Lyde Perkins. DORA was baptized at an early age at Chaney Grove Baptist Church, in Timmonsville, South Carolina and also attended Mt. Carmel Baptist Church, also in Timmonsville, South Carolina. She was a faithful member of Mt. Zion United Methodist Church in Timmonsville, South Carolina, where she sang in the choir, served as a Missionary, and on the Mothers’ Board. She worked on a family farm for several years until she became a Homemaker. DORA married the late Valentine Byrd at the age of 15 and they were joined until his death in 1989. To this union, four children were born. She was predeceased by her sons, Sammie Lee Byrd, Willis (Tom) Byrd and Wallace (Nunnie Boy) Byrd. She was the sister of the late, Charlie Perkins, John Perkins, Walter (Son) Perkins, Samuel Perkins, and Ruth Jackson. DORA was predeceased by her parents, her siblings, three of her children, a granddaughter Andreta Williams and a grandson Edward Byrd. She is survived by her daughter, Catherine Byrd Freeman of Timmonsville, SC and her loving Grandchildren; a special thanks to her nieces Juanita Jackson, Celeste (James) Ellis, Ralphine (Herbert Lee) Johnson and Johnnie Mae Perkins; a host of great and great-great grandchildren, cousins, and a multitude of special family and friends.

The family of Mrs. Isadora Perkins Byrd created this Life Tributes page to make it easy to share your memories.

Send flowers to the Byrd family.