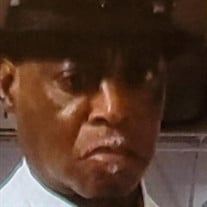 Jerome Robinson, 67, of Lynchburg, South Carolina, passed away on September 24, 2020 after his battle with cancer. He was born on May 29th, 1953 to Mary Lee Wright and the late Wesley White. Jerome Robinson attended the public schools of Sumter... View Obituary & Service Information

The family of Jerome Robinson created this Life Tributes page to make it easy to share your memories.

Send flowers to the Robinson family.