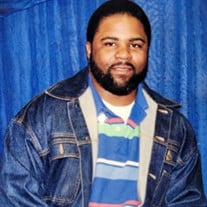 Jessie James “Jski” Jackson, the son of the late Jimmy Jackson was born on September 14, 1971, in Darlington County. On Sunday, December 26, 2021, he transgressed into eternal peace and rest. Jessie received his formal education in Florence County Public Schools and was a 1989 graduate of Timmonsville High School. Upon graduation, he enlisted in the U.S. Army. At an early age, he received Christ as his savior, and was a member of Center Baptist Church. He was proceeded in death by his father, Jimmy Jackson and grandparents. Jessie was a loving son, father, brother, and friend. He leaves to cherish his precious memories and legacy: two sons Antonio D. Jackson, and Justin J. Jackson, both of Timmonsville, SC; his mother, of the home, Nathene Jackson, Timmonsville, SC; two brothers Tony (Ernestine) Dargan of Irmo, SC and Christopher Jackson of Greensboro, NC; two sisters Latonia D. Jackson and Mary L. Jackson both of Timmonsville, SC; one uncle James (Frances) Dargan of Chesapeake, VA; three grandsons Omarion McKithen, Trevion Anderson, and Antonio Jackson Jr.; three nephews, and four nieces, four great-nephews, one great-niece and a host of Aunts, Uncles, and cousins.

The family of Jessie Jackson created this Life Tributes page to make it easy to share your memories.