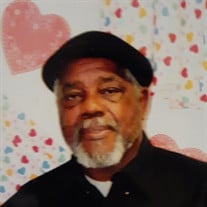 Mr. Jimmy Gallishaw affectionately known as “Jay” departed this earthly life on Thursday, December 24, 2020 after a brief illness. Jimmy was born on February 11, 1951 to the late Easta Mae Gallishaw Dolford and the late Doc Moore. Jimmy was born and raised in Sumter County. As a youth he attended Clarks United Methodist Church with his maternal grandmother Mariah Gallishaw. He was educated in Sumter County public schools. After school he attended the Job Corp program in Kentucky where he learned many trades. In 1974 he met the love of his life Ollie Hollomon and they wed on November 16, 1974 and remained married until his death which was for 46 years. This beautiful union was blessed with four children Jenene, Jimmy Jr., Christi and Earl. Jimmy or “Deh” as he was affectionately known by his children was a very loving and protective father. Jimmy had a very productive career as a pool installer. His skills led him to open his own business Pools-R-Us. He subcontracted under Pee Dee pools and Spa of Florence, South Carolina for 25 years. He later moved his business to Richard's Pool Service in Darlington, South Carolina for 10 years. After 35 plus years in the pool business he retired. If you have visited any hotel in the Florence, Darlington and Myrtle Beach areas you have seen his best work at hand. After retirement he decided to “take a little job” in his own words to keep busy. He started at Napa of Hartsville in 2014 where he was still employed. In his spare time, he was the community lawn man. He loved being of service and help to his friends and neighbors. He was a kind and giving man. He was PaPa to many of the children in the community. If he ate, they ate. If they needed a bed the door was always open. Jimmy was preceded in death by five brothers, Nathan Gallishaw, David Gallishaw, Butch Gallishaw, Willie Dolford and Herbert Lee Dolford. He leaves to cherish his memories: his wife Elder Ollie Hollomon Gallishaw of the home; four daughters; Melinda Porter and Rochelle Benjamin of Sumter, South Carolina, Jenene Gallishaw and Christi Gallishaw of Hartsville, South Carolina; two sons, Jimmy Jr., (Adrienne) Gallishaw of Hartsville, South Carolina, and Earyarda Gallishaw of the home; one special daughter Veronica Roberson of the home; one special son Brandon (Grace) Sipp of Hartsville, South Carolina; three sisters, Essie Mae Lewis of Sumter, South Carolina, Dianne (David) McKenzie of Olanta, South Carolina, and Annette (Howard) Addison of Lamar, South Carolina; three brothers, Robert Dolford of Darlington, South Carolina, Larry (Shelby) Dolford and Kenneth (Regina) Dolford of Lamar, South Carolina; ten grandchildren; two great grandchildren; special in-laws, Woodrow (Phyllis) Martin of Timmonsville, South Carolina; a host of nieces, nephews, other family and friends.

The family of Jimmy Gallishaw Sr created this Life Tributes page to make it easy to share your memories.

Send flowers to the Gallishaw family.