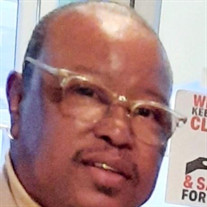 John Henry (Sammy) Hickson, Jr of Lynchburg SC departed this life on November 23, 2020 at Prisma Health Tuomey Hospital in Sumter SC. Sammy was born January 29, 1956. He was the son of the late John Henry Hickson, Sr and Retha Mae Lemon. Sammy was educated in the public schools of Lee County, SC. His fun-loving spirit was recognized by everyone that knew him. His generous nature and kind heart will truly be missed. Sammy was a resident of Columbia, SC for many years. While living in in Columbia, he was a member of Francis Burns Methodist Church. Sammy was employed by Columbia Farms for 27 years, where he retired in January of 2020. Sammy relocated back to his hometown of Lynchburg in August of 2020. Sammy was united in holy matrimony to Marian Harry-Hickson. The love they shared will forever live on in her heart He was proceeded in death by his uncle Jerome Hickson, Sr, and Aunt Gussie Hickson who reared him as their own. He leaves to cherish his precious memory: his loving wife Marian Harry-Hickson; two daughters, Sherrell (Oliver) McFadden of Florence SC and Krystal Hickson of Sumter SC; one step-daughter Deila White of Virginia; a special friend who he considered a son Kwame Peay (Miranda) Jones of Sumter SC; three grandkids, Darreon Lyde, Paden White and Tarik Shiggs; three sisters, Shirley Hickson, Lisa Hickson and Lucy Hickson all of Maryland; two brothers, Lavern (Shirley) Hickson of Lynchburg SC and Michael Nelson of Timmonsville SC; one uncle, Leroy Hickson of Maryland; one aunt, Lillie M. Williams of Washington DC; two stepsons, Tieya Harry and Ferris McClam of Lynchburg; three step grandchildren; four brothers- in- law, Jonathan, Bobby, Pomanda and Ray; four sisters -in -law, Loretta, Hilda, Mary, and Phylisha; a host of nieces, nephews, family and friends.

The family of John Henry Hickson Jr. created this Life Tributes page to make it easy to share your memories.

Send flowers to the Hickson family.