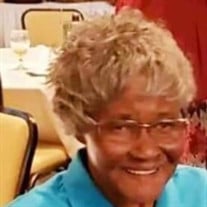 On January 8, 2021 God made a special call from ministry to rest, Mrs. Lillie Mae Simmons Gee. She was born on January 4, 1930 in Timmonsville, South Carolina to the late John and Bessie Green Simmons. Mrs. Gee was educated in the... View Obituary & Service Information

The family of Lillie Mae Gee created this Life Tributes page to make it easy to share your memories.

Send flowers to the Gee family.