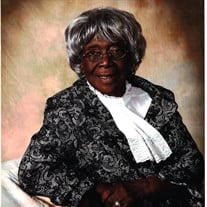 Louvenia Moses Simon- Hough affectionately known as “Bet" was born January 10, 1927 to the late Hayes Moses and Priscilla- Jennings Moses in Bishopville, South Carolina. She was the youngest and last survivor of nine children. She was preceded in death by eight siblings: Robert McQuillar of Camden, South Carolina, Ida Joseph of New York, Eugenia Johnson of Fort Pierce, Florida, Mary Moses of Bishopville, South Carolina, Alice Howard of Delaware, Ben Moses of Timmonsville, South Carolina, Dallas Moses of Baltimore, Maryland, and Priscilla Moses of Bishopville who died at the age of three. Mrs.Louvenia was raised on the farm of her maternal great-grandmother, Harriet Josey. She attended a one-room schoolhouse in Lee County, South Carolina where she received an eighth grade education. She was a member of her home Church, St. Mark Baptist Church, Manville South Carolina for many years. In 1957 she married Woodrow Simon of Wysacky and moved her membership to New Zion African Methodist Episcopal Church, from that union two children were born, unfortunately one died at birth. Later in life she married the late Marvin Hough of Lamar, South Carolina. Ms. Louvenia was a very tender-hearted person. If anyone came to her wanting food, she would gladly feed them. She would always say “it doesn’t hurt to give a person a piece of bread”. Despite the many times she was deceived she showed integrity and was always willing to help others. She was a quiet soft spoken person. She had a great memory and could be right lied on to give family history. Upon returning to Timmonsville, South Carolina for the second time she joined the Glorious Pentecostal Apostolic Church, of Timmonsville. She later became one of the mothers (Mother Simon) of the church. She also accompanied her daughter to Family Worship Center of Florence, South Carolina and the Saints called her Mother. They honored, respected and loved as always. She would say FWC people were nice and very friendly. However, Glorious was her heart. Mrs. Louvenia was preceded in death by her two children, Lucerne and Queen Ethel. Mrs. Louvenia leaves to cherish her memories: one daughter, Eva Wise of Philadelphia, Pennsylvania; four sons: Ernest Moses of Philadelphia, Pennsylvania, Woodrow Simon Jr. (Latonya), Lawton Oklahoma, Ervin Simon of Timmonsville, South Carolina and Wendell (Renee) Simon of Florence, South Carolina; 11 grandchildren; 15 great-grandchildren; a host of nieces nephews cousins and friends.

Louvenia Moses Simon- Hough affectionately known as &#8220;Bet" was born January 10, 1927 to the late Hayes Moses and Priscilla- Jennings Moses in Bishopville, South Carolina. She was the youngest and last survivor of nine children. She was... View Obituary & Service Information

The family of Louvenia Simon Hough created this Life Tributes page to make it easy to share your memories.

Send flowers to the Hough family.