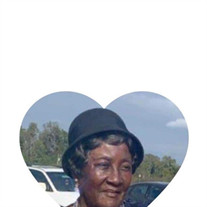 Mrs. Margaret Solomon 84, the widow of Willie T. Solomon departed this life on Tuesday October 6, 2020 at the home of her daughter, Mary Jackson of Timmonsville, South Carolina, after an extended illness. Margaret was born in the Lee County,... View Obituary & Service Information

The family of Margaret Solomon created this Life Tributes page to make it easy to share your memories.

Send flowers to the Solomon family.