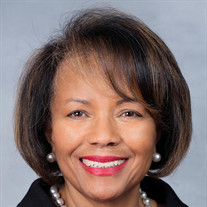 A private graveside service for The Honorable MaryAnn Eaddy Black, MSW, LCSW was held on Friday March 27, 2020 at 8:30 AM in Durham, NC. She made a peaceful transition to her heavenly home on March 25, 2020 in the comfort of her home. MaryAnn was born in Manhattan, New York to Mrs. Susanna Law Eaddy and the late Reverend Dr. Solomon Eaddy, Sr. and at an early age her parents moved from New York to Florence, SC. She was educated in the Florence Public School System and graduated from Wilson High School. She went on to further her education at Benedict College in Columbia, SC and obtained a Bachelor of Science degree in English. After moving to Durham, NC she furthered her education at UNC-Chapel Hill earning a Master’s Degree in Social Work. MaryAnn was an accomplished clinical social worker who served in private practice for more than 30 years providing psychotherapy services to children and their families. In 1994, she was named “Social Worker of the Year” by the State of North Carolina and later the same year by the National Association of Social Workers. With a desire to increase her advocacy on behalf of children and families she entered the political arena as a Durham County Commissioner from 1990 to 2002, and as the Chair of the Durham County Commissioners from 1996 to 2002.At the time of her transition, MaryAnn served as Associate Vice President for Community Relations for the Duke University Health System, where she worked tirelessly to establish partnerships with the city, the county and other agencies and organizations to empower every citizen regardless of race, ethnicity, or socioeconomic status. MaryAnn’s commitment to serving others is one of the many reasons she proudly served in the NC General Assembly representing District 29. She served on a number of Standing and Select Committees including but not limited to Aging; Appropriations, Health and Human Services; Health; and House Select Committee on School Safety. During her career she received numerous awards, and served on local, state and federal committees. Additionally, she was a member of Alpha Kappa Alpha, Sorority, Inc. She was preceded in death by her father, Reverend Dr. Solomon Eaddy, Sr.; son, Christopher C. Black; and brother, Frederick Eaddy. Survivors include: a son Jonathan C. Black; grandson Jordan Black; mother, Susanna Eaddy; brother, Solomon (Barbara) Eaddy, Jr.; sister, Barbara (Dr. Allie) Faye E. Brooks; five nieces and nephews. A Memorial service will be held at a later date.

A private graveside service for The Honorable MaryAnn Eaddy Black, MSW, LCSW was held on Friday March 27, 2020 at 8:30 AM in Durham, NC. She made a peaceful transition to her heavenly home on March 25, 2020 in the comfort of her home. MaryAnn... View Obituary & Service Information

The family of Maryann Eaddy Black created this Life Tributes page to make it easy to share your memories.

A private graveside service for The Honorable MaryAnn Eaddy Black,...

Send flowers to the Black family.