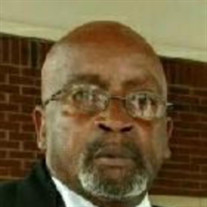 Mr. Otis Keith was born in Florence County on February 2, 1954 a son of the late Harry and Lula Mae Keith Davis. He entered into eternal rest on August 10, 2020. He married the “sparkle” of his eye, Annette R. James, on May 8, 2010.Otis was a professional truck driver seeing the world from 18 wheels until his retirement. Otis enjoyed preparing gourmet meals with lots of love. Whenever, you stopped by his home or he knew you were coming there was a meal on the stove. He always seemed to have enough for everyone. Otis was a very caring and talkative man. He could talk with you about anything from the weather to big-rigs to seasonings to the latest news. He was preceded in death by, one child , Demonds O. Keith and siblings, Robert Foxworth, John Davis, and Barbara Davis He leaves to cherish his fondest memories: his loving and devoted wife, Annette R. Keith; his children, Adrian (Clarice) Keith, Shoanta “Vett” James, and JaWanda James; children raised as his own, Pamela, Paula and Tasha McWhite, Corey Dargan, Shelia and Daniel Dargan; a very special grand-daughter, Layla Cobia, who visited “Papa” every day; a special grand-son Olajuwon Washington; his siblings, Rodney Davis, Earlena (Daniel) Harrison, Rosalind (Reggie) Mitchell, Harriett (Gerald) Cameron, Renea (John) Alexander, Daisy Eaddy, and Barbara (Calvin) Billingslea; five aunts, Essie Graham, Veda Bartell, Flossie Smalls, Juanita Davis and Joyce McNeil; two uncles, Rudy Blaine and Ray (Lucille) Washington, Jr. ; ten nieces; fifteen nephews; four sisters-in-law; two brothers-in-law; fourteen grandchildren; twenty-nine great-grandchildren; a host of other relatives and friends.

The family of Otis Sylvester Keith created this Life Tributes page to make it easy to share your memories.

Send flowers to the Keith family.