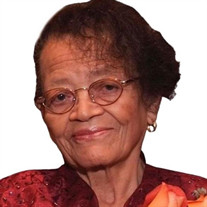 Mrs. Eaddy affectionally called “Sue” by her family members, made a peaceful transition to her heavenly home on April 5, 2021 in the comfort of her home. She was born in Effingham, SC to the late Augustus Law and Louise Cooper Law. She was educated in the Florence Public School System. After marrying the love of her life, the late Reverend Dr. Solomon Eaddy, Sr., she devoted her time to raising her children while her husband served in the Navy and as a prize fighting boxer in New York City. In 1947, Sue relocated with her family to Florence, South Carolina where she continued to raise her children and worked in the family-owned store connected to their home. She was employed at Wilson High School as a Study Hall Teacher. No matter how busy of a day she might have had, she always made time to read the Bible and the local newspaper. It was not uncommon to hear her say “I love everybody” which was evident in the loving relationships she established at the church where she was a member (New Ebenezer Baptist Church); and the churches where she worshipped and served with her husband in ministry faithfully for more than 50 years (Mt. Tabor Baptist Church, Elizabeth Missionary Baptist Church, and Mt. Carmel Baptist Church, respectively). She was an active member of the Elizabeth Chapter Order of the Eastern Star Lodge #296 for 72 years and served in numerous ministries at the churches where her husband pastored. Susanna was preceded in death by her parents Augustus Law and Louise Cooper Law; husband Reverend Dr. Solomon Eaddy, Sr.; son, Frederick Lee Eaddy; daughter, The Honorable MaryAnn E. Black; grandson, James Christopher Black; two sisters, Gussie Law Johnson, Laura Law Bostick; two brothers Joe Law and Caesar Law. She leaves to cherish her memory: two devoted children, son Solomon (Barbara) Eaddy, Jr. and daughter Barbara Faye (Allie) Eaddy Brooks; five grandchildren, Solomon “Geno” Eaddy, III, Allie Eugene (Janell) Brooks, III, DeAnna Fredrica Brooks-Davis, Jonathan Cedric Black, Thelma Susanna Eaddy Brooks; four great grandchildren, Jordan Black, Hailey Elizabeth Brooks, Allison Elise Brooks, and Allie Eugene “Dru” Brooks, IV; sister Ruth Law Eaddy; sister-in-law Reverend Eliza Eaddy Black; “adopted son” Alphonso Greene, and numerous nieces, nephews, and family members.

Mrs. Eaddy affectionally called &#8220;Sue&#8221; by her family members, made a peaceful transition to her heavenly home on April 5, 2021 in the comfort of her home. She was born in Effingham, SC to the late Augustus Law and Louise Cooper Law.... View Obituary & Service Information

The family of Susanna Law Eaddy created this Life Tributes page to make it easy to share your memories.

Send flowers to the Eaddy family.