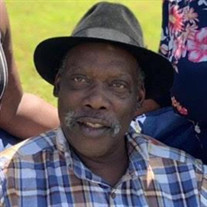 Mr. Terry Lowery, son of the late Mr. Melton Lowery, Sr. and Lottie Sansbury Lowery was born on January 25,1962. He departed his earthly life as God released him from all worldly pain on September 7, 2020. Terry graduated from Timmonsville High... View Obituary & Service Information

The family of Terry Lowery created this Life Tributes page to make it easy to share your memories.

Send flowers to the Lowery family.