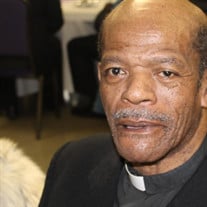 Elder Thomas Davis, age 83 of Sumter, SC made his triumphant transition to glory on Thursday, July 23, 2020 after an extended illness. Elder Davis was born June 15, 1937, to the late Robert and Emma (Amos) Davis in Sumter, South Carolina. Elder Davis was employed by Santee Printworks in Sumter, SC as a machine operator and retired the year of 1999 after 30 faithful years of service. Elder Davis has been an active member of the Church of God by Faith Inc. (COGBF) for over seventy years, and has proven himself as a dedicated man of God. Elder Davis preached sound doctrine and was blessed by God with the gift of healing. He has pastored several churches over a span of 45 years in SC with the Church of God by Faith (COGBF). The following churches within COGBF, Inc. were blessed under his leadership: North, Columbia, Orangeburg, Congruity, Davis Station, and others. He also served as State Evangelist, Advisor to the District Elder, evangelized and preached in several states. Elder Davis conducted countless outreach missions in several counties in SC. In 1976 he founded and established Columbia Mission, COGBF where many souls were blessed, and the church is still in operation today. In 1995 Elder Davis was appointed pastor of COGBF Davis Station, SC. He served faithfully adding souls to the church and earning the name of “The Praying Man”. Through his prayers many were healed from all types of afflictions, sickness, and saved from their sins. People came from near and far to receive prayer and deliverance by the Holy Ghost Power. During Elder Davis pastorate at Davis Station, major renovation was made to the church. He served faithfully as pastor of Davis Station until 2015 when he retired from pasturing. Shortly after retirement he became ill. However, that did not stop him from preaching and praying from his hospital bed. Elder Davis lasting legacy was his relentless commitment to God as he taught, prayed, counseled, encouraged, comforted, and above all he loved others deeply. Elder Thomas Davis was united in holy matrimony to the late Mother Lula Ann Johnson-Davis on July 21, 2012 for 4 years until her passing in 2016. In addition to his parents and wife, he was preceded in death by two sisters; Eva Taylor and Beulah Davis; and six brothers; Henry Davis, David Davis, Elijah Davis, Willie Davis, Austin Davis, and Ernest Davis. Elder Davis leaves to cherish his beloved memory; one brother-in-law Elder James Taylor and one Sister-in-law; Hattie Bell Johnson Smith. He will be fondly remembered by many nieces and nephews, extended family, church members, and friends.

The family of Elder Thomas Davis created this Life Tributes page to make it easy to share your memories.

Elder Thomas Davis, age 83 of Sumter, SC made his triumphant...