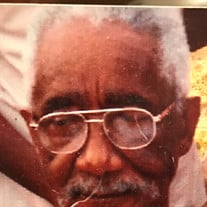 Willie Ernest Rogers, 88 peacefully transitioned on April 29, 2020 at 4:21 PM at Lake City Community Hospital in Lake City, SC. Willie was born to the Mr. Sam and Ms. Annie E. C. Rogers on June 22, 1931 in Timmonsville, SC. Mr. Boy, “Boy”, as he was affectionately called, was educated in the Timmonsville public school system and eventually relocated to Jacksonville, NC in the early 1950s. From there, Mr. Boy moved to the upper east coast where he worked as a linesman for Ford Motor Company. He maintained his employment with the company for many years, eventually relocating to Atlanta, GA and continuing his service until his retirement in 1987. Upon his retirement, Mr. Boy moved back to Timmonsville and fully invested himself in his interests of cars and trucks and the music of B. B. King. He was also known for his sharp sense of style and telling elaborate, yet intriguing “old-man” stories. Willie was a member of Mt. Zion U.M.C. Willie Rogers is survived by: his loving sister, Elizabeth Simonds; children, Willie Rogers Jr., Veronica Rogers, Shirley-Ann Rogers, Robert (Pearl) Rogers, Mary Esther Washington, Michael Rogers, Anthony “Amp”(Lessie) Shields , Patricia “Doll Baby” Shields, Gwenda Raymond)King , Constance Holmes (Lawrence), Charmaine Lowe, and Monic(Walter) Garner-Buckner ; a host of extended family members and a special friend, Dorothy Perkins. Willie was preceded in death by: his wife, Mary Garner Rogers; son, Jerry Garner; daughters, Gwendolyn Rogers and Paulette House (Thomas); sisters, Lucille Rogers Martin, Annie Laura Cooper and Evelyn (Albert) Adams and a brother, Sammie Lee (Odella) Rogers. Acknowledgment: The family of Mr. Willie “Boy” Rogers acknowledges with sincere thanks and appreciation, all expressions of kindness and comfort shown to us during the time of the passing of our loved one. Words are inadequate to express the humbleness and gratitude we feel towards our family and friends who consoled us during our bereavement. You have lifted our heavy hearts and made this solemn time easier to bear. Thank you, and may God continually bless you!

The family of Willie "Boy" Rogers created this Life Tributes page to make it easy to share your memories.

Send flowers to the Rogers family.