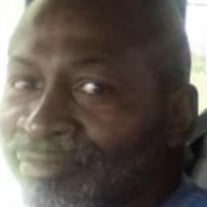 Mr. Willie James Samuel, was born to the late Mr. Sylvester Samuel and the late Mrs. Margaret Samuel Taylor on June 8, 1961 in Darlington County. He was lovingly reared by his step-father the late Elijah Taylor, Sr. He was educated in the Florence... View Obituary & Service Information

The family of Willie Samuels created this Life Tributes page to make it easy to share your memories.

Send flowers to the Samuels family.